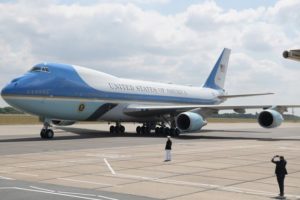 The US aircraft manufacturer Boeing received a contract for the construction of new aircraft destined for US President Donald Trump and his successors. The volume of the contract will be 3.6 billion USD< representing a large rebate of over 1 billion USD. Boeing will start the construction of the Air Force One in early 2019 and complete the work at the end of 2024. The administration of the President of the United States managed to achieve a discount, which taking into account inflation, about 1 billion USD in comparison with the initial plans of the Pentagon during the negotiations that lasted one and a half years. The fact that Boeing will supply new aircraft for the US president, it became known at the end of January 2015. The decision about this was taken during the administration of Barack Obama, but later Trump expressed indignation at the value of the contract. "Boeing is building an absolutely new board number 747 for our future presidents, but its price is not controlled, it is more than 4 billion USD. Cancel the order", said Donald Trump in December 2016. The fleet of the head of the White House consists of two aircraft built on the basis of the Boeing 747-200B, a long-range two-deck wide-body aircraft. In 2017, the lifespan of both airliners with the callsign Air Force One reached 30 years. In addition to the two airliners, the White House has more than two dozen helicopters, which are mostly obsolete and require replacement. Most of them are Sikorsky SH-3 Sea King, produced in 1974, and more modern Sikorsky White Hawk 1989 release.