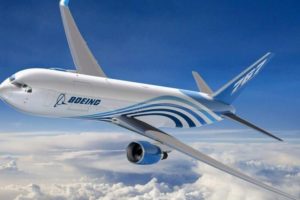 Boeing reported fourth-quarter financial results that surpassed analysts’ expectations The US aircraft manufacturer also made optimistic forecasts for 2018. Boeing expects to deliver 810 to 815 commercial planes this year. That’s 47 planes more than last year and over the company’s previous record of 763 aircraft delivered within one financial year.

Thanks to larger orders for new aircraft, Boeing raised its earnings per share in 2018 from 13.80 USD to 14.00 USD. This is above the average analysts estimates for earnings of 11.96 USD per share.

For the fourth quarter ended December 31, Boeing’s earnings doubled to 4.80 USD per share against 2.47 USD per share an year earlier. The company’s results are supported by both the increased production of aircraft and the new US tax law.

Boeing’s forecast for 2018 is that it will have at least a 12.8 billion USD free cash flow.

The earnings of the aircraft manufacturer in Q4 2017 amounted to 25.37 billion USD, which is more than the market expectations for 24.69 billion USD.

At the end of December it became clear that the US airline is considering a “potential cooperation” with the Brazilian Embraer SA. This will greatly enhance Boeing’s presence in the highly competitive regional aircraft sector. Among the options discussed is the creation of a joint venture to allow both companies to share assets and cross-sell their complementary range of aircraft.