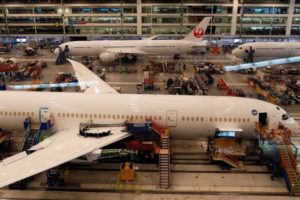 Boeing reported better-than-expected finance statement in Q3 2018. the US aircraft manufacturer raised its profit forecast for 2018, which is expected to reach a record level.

Boeing reported a revised profit of 3.58 USD per share, exceeded analysts expectations with 11 cents. The revenue for the third quarter amounted to 25.15 billion USD, which is 1 billion USD above analysts’ expectations.

This summer, Boeing has contracted billions of dollars in military equipment. Then the CEO Dennis Muilenburg said that the new contracts are an important part of the future development of the company.

In the aviation segment, Boeing delivered 190 aircraft in the third quarter, with a total of 568 for the year. The business unit did not reach its expectations in the second quarter, but in its latest activity report, the company said that would deliver at least 810 aircraft this year. Boeing continues to increase its production, striving to reach the key target of 52 aircraft per month.

About 35% of the company’s orders come from China, but analysts say there is no cause of concern in the context of the trade war between Washington and Beijing.