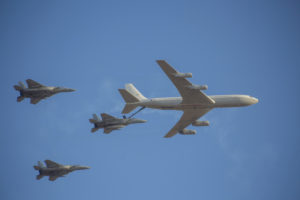 The American aircraft manufacturing concern Boeing has reached an agreement with the Israeli government, according to which it will spend at least 35% of all country’s purchases.

This agreement will allow Israel to partially compensate for changes in the agreement on American military assistance, under which Israel is now obliged to spend all assistance in the US, while under the old agreement, more than 25% of assistance was converted into shekels and spent in Israel.

“A reciprocal purchase agreement on such a scale is a significant achievement which will lead to the growth of many companies in the domestic market, and to expand their activities and success in international markets”, said Israeli Economy Minister, Eli Cohen.

At the moment, Israel is choosing between purchasing an additional batch of F-35 aircraft, manufactured by Lockheed Martin, or F15I produced by Boeing.

With Israel expecting to make about 10 billion USD of military purchases from Boeing over the next decade, the agreement with the US aerospace company means 3.5 billion USD in new business in Israel.