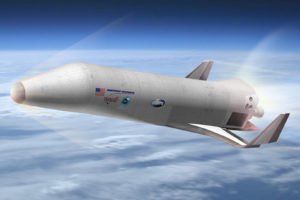 The American aircraft manufacturing concern Boeing started building the first flight model of a promising space drone Phantom Express, which is being developed as part of the XSP program commissioned by the United States Department of Defense Advanced Research Projects Agency (DARPA). The model of a fuel tank for liquid oxygen has already been completed and the production of a tank for liquid hydrogen has begun. The production of the latter will end in 2019.

The XSP (Experimental Spaceplane) program was launched in 2014, and in 2017, Boeing received a contract to develop and assemble the first flight model of a space drone. A promising drone will have to significantly simplify and reduce the cost of launching small devices into orbit. According to the plans of the military, Phantom Express will have to carry a cheap second stage with satellites weighing up to 1.4 tons. It will be responsible for the placement of satellites in low earth orbit, after which it will return to the atmosphere and burn.

According to the requirements of the military, the cost of one launch of the device should not exceed 5 million USD. In size Phantom Express, which will be made by the type of shuttle, should be comparable to the American fighter-bomber F-15 Eagle. The length of this combat aircraft is 19.4 m, height – 5.6 m, and wingspan – 13 m. Space drone will be used for military launches, and for commercial purposes.

According to Boeing, fuel tanks for the Phantom Express advanced UAV are made by winding carbon fiber strips on the equipment. A special robot is responsible for winding. Then the resulting carbon frame in a vacuum chamber is filled with a polymeric binder and polymerizes. According to the concern, the use of carbon fiber for the production of fuel tanks has reduced their weight by almost 40 percent compared to aluminum tanks of the same volume. Other details about the assembly are not specified. The final build of Phantom Express should start in 2019.

After the assembly of the first flight model of the space drone is completed, it will be tested. As expected, the first flight of a promising space drone will be made in 2021. Under the terms of the agreement with DARPA, Boeing will have to launch the spacecraft ten times in a row within ten days.

In July of this year, specialists from the United States Department of Defense Advanced Defense Research Agency (DARPA) and the American company Aerojet Rocketdyne conducted a series of successful fire tests of the AR-22 rocket engine. It is planned to install on the space drone Phantom Express. The power plant has passed a series of ten inclusions. The tests with a series of inclusions were carried out for 240 hours.