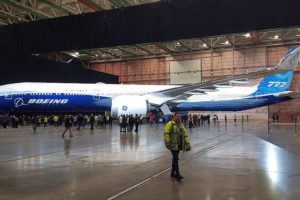 The US aircraft manufacturer Boeing unveiled its latest 777X wide-body aircraft. The presentation of the new airplane was done on Wednesday, March 13, but was initially planned two days earlier. Because of the March 10 crash of the Boeing 737 MAX8 liner in Ethiopia, the company first moved the presentation to another day and then decided to do it without the participation of the media. The presentation took place at the company’s plant in Everett, Washington.

Boeing 777X is the newest family of wide-body aircraft. The 777X aircraft will be built on the basis of the Boeing 777. In November 2013, at the Dubai Air Show, a division of Boeing Commercial Airplanes announced the launch of the program. The first delivery is scheduled for 2020.

According to the company, the 777X will become the largest and most economical twin-engine liner in the world, with fuel consumption and operating costs lower than those of competing models by 12% and 10%, respectively. The 777X family includes models 777-8X and 777-9X – both models are designed to meet market needs and customer preferences. The 777-8X is a direct competitor to the A350-1000, and the 777-9X is the only one in its class.

“The 777-9X opens up new growth opportunities for air carriers due to passenger capacity from 400 to 425 people and a flight range of 7,600 nautical miles (14,075 km). In addition, the 777-9X will have the lowest operating cost per seat compared to other civil aircraft. The 777-9X is the only twin-engine liner on the market in its class and has no competitors”, says the statement of Boeing.

Passenger capacity of the 777-8X is 350-375 seats with a flight range of 8,700 nautical miles (16,110 km). However, in the case of the 777-8X, the range is not everything. An additional advantage of this aircraft is flexibility. The 777-8X is able to provide operators with increased profits: an increase in payloads, combined with improved fuel efficiency on both short and long routes, ensures profit growth. In addition, these characteristics allow you to operate the 777-8X with increased payload even at particularly complex airports, which are located high above sea level or have a hot climate. In the past, it was necessary to choose between payload and range. 777-8X provides both, providing the operators with maximum profitability, according to Boeing.

The company also stressed that the 777X design features the latest innovative technologies, including the most modern and economic engine in history. The engine supplier, GE, was announced as the very first program partner. The GE9X engine will be more than 5% more economical than any other engine in the class. In addition, the span of the fourth generation composite wing 777X is larger than that of the modern 777 aircraft. Skewed folding wingtips and optimized its span allow for increased efficiency, substantial fuel savings, and ensure compatibility with the airport infrastructure. The combination of revolutionary engine technology with the aerodynamics of Boeing and a completely new high-performance composite wing allows achieving good operational characteristics. This efficiency is directly related to exceptional environmental performance.

“The 777X incorporates the best features of a proven and reliable 777, as well as the latest 787 Dreamliner technology. The use of technology from the 787 Dreamliner, in the cockpit, flight controls and other systems is just the beginning. We use 787 technology for the 777X where they help our customers increase profits. Undoubtedly, thanks to its innovations, the 777X rightfully takes the place of the most advanced and fuel-efficient civil aircraft”, says Boeing.