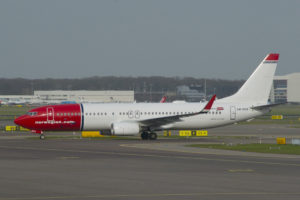 Norwegian Air Shuttle aircraft Boeing 737-800 overran the end of the runway after landing in heavy rain at the Helsinki Airport. The airplane with 166 people on board landed on runway 04L after flight from Stockholm (Sweden), but overran its end and turn off skidded right off the paved surface, stopping on the soft ground. The aircraft stopped without any injuries and suffering only minor damages.

The Norwegian Air Shuttle aircraft Boeing 737-800 was pulled off the soft ground by a tug and taxied to the airport terminal, where all the passengers were disembarked normally.

The accident was reported to local authorities and aviation safety inspection, which initiated investigation for the root cause. The plane suffered only minor damage and after repair and inspection will return in service.

According to the local experts, it is a common procedure when landing to runway 04L at inki Airport to exit at the very end in order to shorten the taxi time to terminal. Maybe pilots made a slight misscalculation on braking and didn’t respect the weather conditions enough.

The aircraft Boeing 737-800 is from Next Generation, which has improved on the previous style interior with larger more rounded overhead bins and curved ceiling panels. The airplane has maximum capacity for 175 passengers with range of operations 5,436 km. The aircraft has length of 39.47 m, wingspan of 35.79 m and wing area of 124.60 sq m.