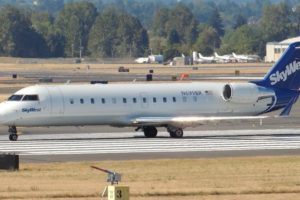 SkyWest aircraft Bombardier CRJ-200, which is operating flight 5879 of United Express, burst all four tires of its main landing gear during landing at Roberts Field in Redmond, Oregon. There were no injuries to the 27 passengers or three crew members on board and all the people were taken by bus to the airport terminal.

SkyWest issued a brief statement indicating the flight “experienced a tire issue upon safely landing in Redmond” and said the 27 passengers disembarked through the main cabin door and were taken to the terminal. The plane had three crew members.

The return flight of the aircraft to San Fransisco was delayed due to repairs and inspection.

Bombardier CRJ200 is a regional airliner designed and manufactured by Bombardier Aerospace. The CRJ is Canada’s second civil jet airliner after the Avro Canada C102. the aircraft has CF34-3B1 engines, offering improved efficiency. Bombardier CRJ200 has a length of 26.77 m, a wingspan of 21.21 m and wing area of 48.35 sq m.