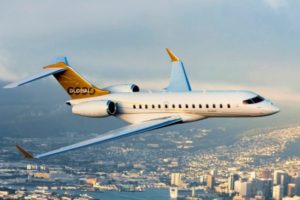 .Canadian aircraft manufacturer Bombardier launches two new private aircraft models in response to the growing demand for large cabin airplanes. The Global 5500 and Global 6500 will be equipped with refurbished cabs, optimized wing and completely new Rolls-Royce engines. They will be able to fly 5,700 and 6,600 nautical miles respectively and are likely to be commissioned by the end of 2019.

Rolls-Royce Holdings launches new series of jet engines, called Pearl, which will be the only system to propel the new Bombardier models.

Bombardier will continue to produce the Global 5000 and Global 6000 models, which are also very successful.

The Canadian aircraft manufacturer delivered ten Global 5000 and Global 6000 aircraft in the first quarter, two more than an year earlier. Last year, Bombardier delivered 45 aircraft of these models, which represents about one-third of all its deliveries of business aircraft.

The largest aircraft manufacturer in Canada is already preparing the debut of its largest global 7000 business aircraft, which will be available in the second half of the year. The aircraft will be sold at price of 73 million USD and company relies on it to provide about 3 billion USD of revenue annually at the start of the next decade.