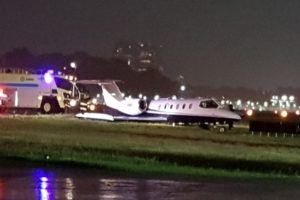 Aircraft Bombardier Learjet 35A made a runway excursion during landing at Aeroparque Jorge Newbery airport in Buenos Aires, Argentina. The aircraft stuck into the soft land near the runway under unknown circumstances. During the accident, onboard there were 2 pilots and one paramedic, performing a sanitary flight. Fortunately, there were no injuries during the runway excursion.

Aeroparque was closed for more than two hours for all operations as a result of the incident.

The investigation for the root cause of the runway excursion is underway. Local authorities and flight safety inspectors were at the scene to estimate the size of the damage of the aircraft.

The plane Bombardier Learjet 35A was operated by the company Baires Fly. It is American multi-role business jets and military transport aircraft. The aircraft is powered by two Garrett TFE731-2 turbofan engines. Its cabin can be arranged for 6-8 passengers. The engines are mounted in nacelles on the sides of the aft fuselage. The wings are equipped with single-slotted flaps. The wingtip fuel tanks distinguish the design from other aircraft having similar functions.