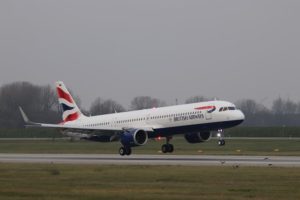 British Airways plane Airbus A321neo suffered a bird strike on approach to Bucharest Henri Coanda International Airport in Romania. The plane was performing flight BA884 from London-Heathrow Airport to Bucharest, but during preparing to land the plane stuck with a bird, suffering slight damages to the nose and front windshield. The aircraft proceeded for a safe landing. Fortunately, there were no reported injuries amid the passengers on board of the airplane.

The local authorities grounded the plane for several hours for inspection and repairs following the accident. The return flight of the aircraft has been delayed by 6 hours.

The Airbus A321neo is a development of the narrow-body airliner A321. Re-engined with CFM International LEAP-1A or Pratt & Whitney PW1000G engines and with large sharklets, it should be 15% more fuel efficient. The A321neo family is based on the previous A321. The plane has lengthened fuselage and has structural strengthening in the landing gear and wing, increased wing loading and other minor modifications due to higher MTOW.