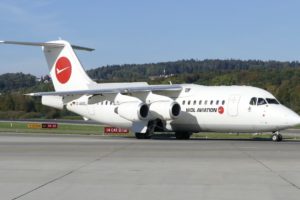 British Airways flight BA3271, operated by WDL Aviation, landed in the wrong country due to mistakenly filed flying plan. Thus the aircraft, which took off from London City airport and should have arrived in Dusseldorf (Germany), landed in Edinburgh (Scotland) on 844 kilometers away from its correct destination. The confusing situation came after wrongly submitted flight plan by WDL Aviation. The same wrong plan was given to the flight control in London, which explains why the plane landed successfully on the wrong airport.

It is unclear at this point how the paperwork for the flight was mistakenly filed to the wrong city, but the pilot and cabin crew were apparently unaware they weren’t supposed to go to Edinburgh until the passengers took notice upon landing.

After acknowledging the mistake, the plane BAe 146-200 was waiting for nearly 2 hours in Edinburgh, before departed again and landed in Düsseldorf about 1:00 pm local time.

Airline WDL Aviation said they were trying to identify the cause of “obviously unfortunate confusion”. The investigation is underway.