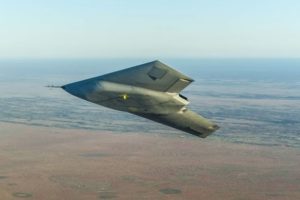 British company BAE Systems, together with the University of Manchester, conducted the first flight tests of the unmanned aircraft Magma, whose wing is completely devoid of any mechanization – spoilers, elevons or deflected socks. According to the report of the British company, the completed inspections were recognized as completely successful.

The flight control of modern aircraft is performed with the help of mobile aerodynamic elements, driven by electric, mechanical or hydraulic systems.

The new UAV Magma, developed by BAE Systems and the University of Manchester, mobile aerodynamic elements is completely devoid of. In their keels, as well as in the wing, the air channels are used instead of them, ending with small nozzles where the conventional apparatus would have Elevons or yaws.

The device is equipped with a turbofan jet engine. In flight, a part of the air is taken from the external circuit of the engine, which then is guided to the wing or keels through one channel or another and, from the nozzles, creates a reactive thrust. If air is supplied to the upper nozzles in the wing’s wing zone, the drone will begin to gain altitude, and vice versa.

Magma is equipped with two types of air channels and nozzles. On one channel, the air stream is accelerated to supersonic speed, after which it is fed into the nozzles located at the trailing edge of the wing. For others – the air flow at subsonic speed is fed into the nozzles located in the zone of the engine nozzle. Mixed with the flow of gases from the engine, it deflects the jet stream, changing the thrust vector.

BAE Systems argue that the abandonment of mechanization allows more free space inside the aircraft, and also makes it lighter. At the same time, the absence of a plurality of movable elements substantially increases the overall reliability of the UAV. The details about the tests have not yet been disclosed. In the near future, developers intend to conduct additional checks of the device.