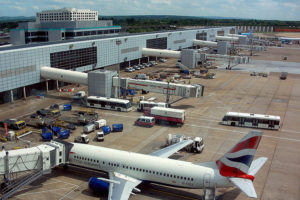 The British government has decided to tighten the rules for the use of unmanned aerial vehicles (UAVs), expanding the no-fly zone from 1 to 5 km around the country’s airports following the incident at Gatwick Airport. This is stated in a statement released by the United Kingdom’s Civil Aviation Authority.

This decision takes effect on March 13. Currently, there is a ban on flying drones at an altitude of more than 122 m. According to the Secretary of State for Transport of the United Kingdom, Chris Grayling, flying UAVs near airports is a “serious crime”.

“Now we are taking additional measures and are expanding the no-fly zone for drones up to 5 km in order to ensure airport security”, said Chris Grayling. “Anyone who manages a drone in the vicinity of the airport should know that he is not only acting irresponsibly but also criminally and may be detained”, added the Secretary of State for Transport.

In accordance with the new package of measures, the owners of drones weighing from 250 grams to 20 kg will also have to register and pass an online test for their management, and the police will be able to land, inspect and confiscate UAVs if necessary. For refusal to land a drone and show a license for the right to operate it, the authorities may impose a fine of up to 100 GBP. This decision was also supported by the British Association of Remotely Controlled Aircraft (Arpas UK).

Gatwick Airport, located 46 km south of London, stopped work on the evening of December 19 due to reports of the appearance of two UAVs over the runway. Planes preparing for landing were redirected to the airport in other cities in the UK and Europe.

“The disruption of flights at Gatwick Airport, caused by drones, was planned, irresponsible and deliberate”, stated Chris Grayling.