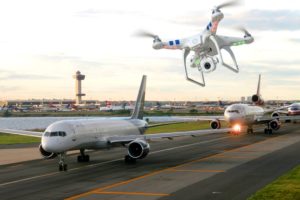 The British Pilot Association urged the authorities to tighten the rules for usage of drones in order to avoid the dangerous rapprochement to the aircraft. According to Steve Landels, an expert on the flight safety association, it is necessary to solve the problem of drones that fly next to passenger aircraft, until the catastrophe happens.

“Significantly increased the number of dangerous encounters lately, and not all who use drones know or pay attention to the rules of their operation”, said Steve Landels.

There have been several near-misses between drones and aircraft in Britain, with sheer chance averting collision in some cases. Under British rules, a drone operator must be able to see it at all times and keep them away from planes, helicopters, airports and airfields.

The appeal was followed after the runway was closed due to the drones seen in the area around London’s Gatwick Airport. As a result of the incident, several flights were delayed. In addition, one of the aircraft of British Airways was forced to land on another airport.

Airlines take the safety risks very seriously. Their global association, IATA, warns of an exponential increase in reports of RPA operating dangerously close to manned aircraft and airports. They are also aware of the financial impact of disruption caused by drones flying close to airports, which cost tens of thousands of pounds.