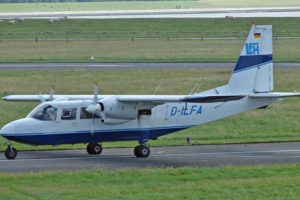 Par-Avion aircraft Pilatus Britten-Norman BN-2A-20 Islander crashed at mountainous terrain in the Southwest National Park in Tasmania, Australia. The aircraft took off from Hobart Cambridge Airport in Tasmania, only with the pilot on board, en route to Bathurst Harbour Airport to pick up passengers, but shortly after that went missing.

The local aviation authority initiated an investigation for the missing plane. Later during the day, the wreckage was spotted in the Southwest National Park in Tasmania on 94 km from Hobart and some 32 km northeast of the destination airport.

The rescue teams arrived at the scene of the accident but found the pilot was already dead. There was no consecutive fire.