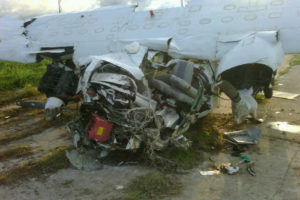 Roraima Airways aircraft Britten-Norman BN-2A-26 Islander crashed near Eteringbang Airport in western Guyana. The pilot sustained fatal injuries and died. The wreckage was located and the body of the pilot Collin Martin was found lifeless. No other people were found on site of the crashed airplane Britten-Norman BN-2A-26, which was engaged in shuttling fuel for miners between Ekereku and Eteringbang.

No one could say for sure what exactly happened, but investigators from the Guyana Civil Aviation Authority (GCAA) were interviewing another pilot who was flying behind the Roraima Airways aircraft at the time. The inspectors will also will be flying in to Eteringbang early today to inspect the crash site and interview witnesses.

“The investigators have to look at the angle it (plane) went down, and a post mortem examination has to be done on the body”, said the director of GCAA, Retired Lieutenant Colonel, Egbert Field.

Sources said before nose-diving to the ground, the plane almost flipped. According to some witnesses the pilot was going in to land when the aircraft crashed. The investigation is under way.

Britten-Norman BN-2 Islander is a 1960s British light utility aircraft, regional airliner and cargo aircraft. Still in production, the Islander is one of the best-selling commercial aircraft types produced in Europe. Although designed in the 1960s, over 750 are still in service with commercial operators around the world.