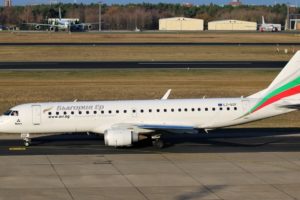 Bulgaria Air Embraer ERJ-190STD, performing flight FB408 from Brussels to Sofia, landed in Vienna by emergency due to a cracked windshield. The airplane was during the flight when the pilot detected damage of the windshield and requested by traffic control to be diverted to the nearest airport, which in the case was Vienna. The passengers on board were alerted to the emergency landing by the crew, who following strictly the safety procedure in this situation.

Bulgarian Air Embraer ERJ-190STD landed safely in Vienna, where all the people were disembarked at the terminal. Another plane from Sofia has come to take passengers away, with 5-6 hours delay.

No reported injuries or serious problems during the incident.

On board of the aircraft was Bulgarian Minister of Defence, Krasimir Karakachanov, as well as other government officials. All commented that crew and pilot acted very carefully and safety during the situation.