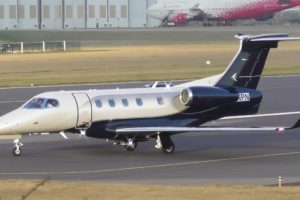 The Brazilian aircraft manufacturing company Embraer delivered to customers the 500th business jet of the Phenom 300 series. According to the reports of the General Aviation Manufacturers Association (GAMA), the Phenom 300 is the only business jets model that has reached this milestone in the last 10 years.

“The aircraft Phenom 300 has attracted customers since it entered the market, and its enormous popularity only prompts us to provide even more service to our customers”, said the President and CEO of Embraer Executive Jets, Michael Amalfitano.

Embraer Phenom 300 is a light jet aircraft, which can carry up to 11 occupants. It is a twin-engined cantilever monoplane with a low-positioned, swept wings. The aircraft has a horizontal stabilizer in a T-tail configuration and a retractable tricycle landing gear. It has two rear-pylon-mounted Pratt & Whitney Canada PW535E turbofan engines. The enclosed cabin has room for nine passengers and a two-pilot crew; during single-pilot operation, an additional passenger can be carried.