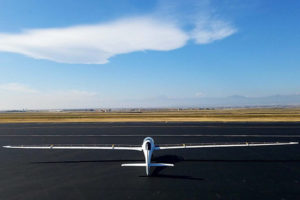 The American company Bye Aerospace has begun flight tests of the demonstrator of technologies of the unmanned aerial vehicle StratoAirNet, which which is fueled by solar batteries.

According to the company, the first flight of the device took place in manned mode on August 20, 2018. Since then there were several more tests. The prototype will then be used to create a whole family of solar-powered aircraft, including aircraft and drone.

Currently, there are no serial production of solar powered aircraft and drones. It is believed that such aircraft will be somewhat cheaper and easier to operate than traditional aircraft with internal combustion engines. In addition, when using rechargeable batteries in flight, aircraft on solar cells will be able to stay in the air for a long time.

In the StratoAirNet technology demonstrator, who recently made the first flight, Bye Aerospace used solar panels that are integrated into the composite structure of the wing and fuselage at the production stage and are filled with a binder polymer. The wing span of the new aircraft is 15 m. It is made in the form of a motorized glider, which in flight is able to use an electric motor to maintain altitude and speed.

The technologies developed on the new demonstrator are planned to be used not only in the StratoAirNet drones, but also in the manned Solesa plane. The UAV will be designed for long patrol and observation flights, mapping, long observation of crops, and search and rescue operations. In turn, the Solesa solar plane can be used for patrolling.

In April this year, Bye Aerospace experienced the electric training aircraft Sun Flyer 2. This aircraft is created for the initial training of civil aviation pilots. It can also be used in small aircraft. The serial aircraft will be able to stay in the air for up to three hours, and the cost of one hour of its flight, according to the developers, will not exceed three dollars. The company claims that Sun Flyer 2 will be the first certified Federal Aviation Administration for a solar-powered aircraft.