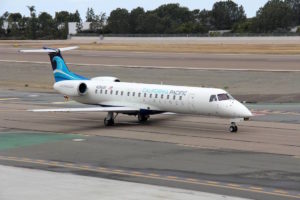 The new California Pacific Airlines was launched today by the 97-year-old entrepreneur Ted Vallas. The small commercial airline that flies out of Carlsbad, California is planning new service to Reno and Las Vegas, trying to get advantage in the high demand for traveling between the two destinations.

The commercial flights will be on a 50-seat, Embraer ERJ145 aircraft.

“The airline aims to draw travelers from northern San Diego County who seek more convenient flights out of a smaller airport that has no other commercial service”, said the Marketing Director of California Pacific Airlines, Ryan DiVita. “The goal is to go into what we view is an underserved market. We feel that the amount of ridership possibility in the northern San Diego area warrants its own service”, added he.

California Pacific will focus on business travelers who commute weekly for their work, as well as those heading to Las Vegas and Reno for leisure activities.