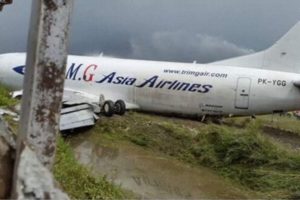 Tri-MG Airlines cargo aircraft Boeing 737-300SF veered off the runway during landing at Wamena airport in Indonesia and stopped in a soft ground. According to the airport official the airplane bounced twice on landing and suffered excursion from the track, slipping to the left. Both main landing gear legs collapsed and the aircraft came to rest with the nose of the aircraft protruding over the a small stream next to the airport boundary wall. There were no injuries during the accident, but the aircraft sustained substantial damage.

Wamena Airport is closed for 3 hours for evacuation purposes. All the flight were redirected to nearby destination. The operations in the airport were restarted just after ensuring the safety of the damaged plane.

The prototype of the Boeing 737-300 is very popular aircraft, used all over the world. The 300 series started production in 1984 and remained in production until 1999. The 737-300 can be retrofitted with Aviation Partners Boeing winglets. The 737-300 retrofitted with winglets is designated the -300SP (Special Performance). Used passenger -300 aircraft have also been converted to freighter versions. The 737-300 has been replaced by the 737-700 in the Boeing 737 Next Generation family.