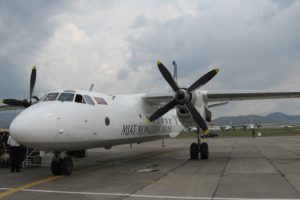 Cargo airplane Antonov An-26 burned down after runway excursion during landing at Maban Airstrip in South Sudan. The crew succeeded to escape from the damaged and burning airplane with only minor injuries. All were evacuated and transported to local hospital for medical examination and treatment. The accident was reported to local fightfightying department, which sent a truck to assist with extinguishing the flames and prevent additional explosion of the cargo plane.

The aircraft Antonov An-26 landed on Maban Airstrip in South Sudan near the city of Bunj in rain and wet dirt strip. The cargo plane skidded and went off the runway, stopping in the north of the airfield. The aircraft suffered serious damages, including damage of the engine and leaking of fuel during the accident. The leaked fuel inflamed, which caused fire to the aircraft as well. There was not enough time for reaction and extinguishing the flames, as quickly the aircraft and cargo burned down.

The local authorities initiated investigation for the root cause of the accident. Also the source of the cargo was not mentioned.

Fortunately during the accident there were no reported serious injuries and casualties.

Airplane Antonov An-26 is a twin-engined turboprop civilian and military transport aircraft. It is widespread all around the world and considered as one of the most effective cargo aircrafts. The overall length of the airplane is 23.80 m, wingspan is 29.30 m and wing area is 802 sq m.