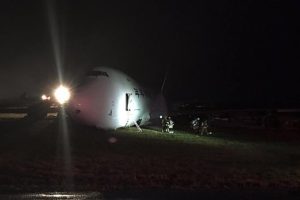 The cargo airplane Boeing 747-400F skids off the runway at Canada’s Halifax airport, causing minor injuries to the four-member crew and forcing the temporary closure of the airfield. Following the accident there was fuel leak the the ground, but no fire occurred. The rescue teams arrived at the scene immediately and prevented more serious accident.

Sky Lease cargo airplane Boeing 747-400F was performing flight to Halifax from Chicago with five people on board. The cause of the accident was not immediately known.

“Our firefighters responded to the scene. They did find that there was a small fire near the tail of the aircraft upon arrival and they swiftly extinguished that”, said Theresa Rath.

According to preliminary information the plane landed with a tailwind – something he called an “immediate red flag”. The airplanes typically take off and land into the wind, which offers pilots more lift and, as a result, more control. However, all aircraft are designed to land with a crosswind or tailwind, though each aircraft has its limits. She said the board will be looking into the limits for the Boeing 747-400.

As a result of the incident, the aircraft fuselage was badly damaged.