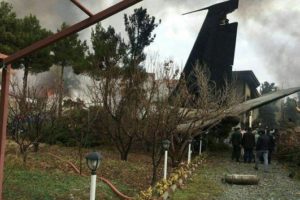 Iranian Air Force cargo plane Boeing 707-300 with 16 people on board has crashed near Tehran in adverse weather conditions. The airplane was carrying mear from Bishkek (Kyrgyzstan) to Karaj’s Payam International Airport but attempted to land on the Fath Airport due to pilot’s mistake. The runway of the Fath Airport was not suitable for landing of heavy cargo aircraft, which caused the accident. The pilot lost control of the airplane upon landing. It smashed through an airport wall and came to rest in a town near the airport. Some buildings have been damaged, but there are no reports for victims on the ground.

Local media is reporting that 15 of the plane’s crew were killed when the plane hit the ground and burst into flames. It is understood one person survived (aircraft engineer) and he is in a critical condition.

A large cloud of black smoke was seen billowing from the crash site as eight emergency vehicles and a helicopter rushed to the scene.


Boeing 707 is a mid-sized, long-range, narrow-body, four-engine jet airliner. Developed as Boeing’s first jet airliner, the 707 is a swept-wing design with podded engines. The 707 has been used on domestic, transcontinental, and transatlantic flights, and for cargo and military applications.