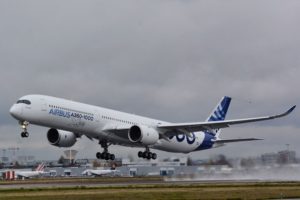 Cathay Pacific received its first wide-body aircraft A350-1000, becoming the second operator of this type of airplanes in the world. The airline plans to operate this aircraft on the route Hong Kong-New York, which lasts approximately 17 hours. This will be the longest flight that is currently carried out from Hong Kong by any airline.

“The aircraft is the first of 20 ordered A350-1000s by Cathay Pacific. Currently, the airline already operates 22 A350-900. With the unification of aircraft, Cathay Pacific will be able to significantly reduce operating costs. The A350 passenger cabin provides passengers with the highest level of comfort in flight: increased individual space, more humid and fresh air, lower pressure, fourth generation entertainment system”, says the statement of Airbus.

“Today we operate one of the youngest parks in the world. The receipt of the new aircraft is in full accordance with the policy of our company. Airbus A350-1000 will allow us to significantly expand the network of our long-haul destinations”, said the commercial director of Cathay Pacific, Paul Loo.

Airbus A350-1000 is the newest and most capacious model of the family A350 XWB. The aircraft is 95% unified with A350-900 for systems and spare parts. A350-1000 is 7 meters longer than A350-900, which allows to increase the capacity by 40%. The A350-1000 differs from the A350-900 with a modified trailing edge of the wing, a six-wheel chassis truck and more powerful Rolls-Royce Trent XWB-97 engines. Thanks to new engines, aerodynamic improvements and new systems, it was possible to reduce fuel consumption of the A350-1000 by 25% compared to the previous generation aircraft.