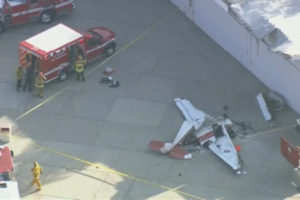 One man died and a 12-year-old boy was critically injured after a small airplane Cessna 150L crashed near the departure end of Runway 12 at Whiteman Airport in Pacoima, California, USA. The plane took off at the airport but experienced an unknown problem that was reported over the radio, then clipped a building, causing it to land upside down.

Los Angeles County firefighting air facility is near the airport and firefighters were able to arrive on scene quickly. They put out a small fire that had started in the plane and extricated the two occupants. Two people, a 12-year-old boy and 60-year-old man, were extracted from the debris. They were taken to Holy Cross Medical Center.

No other injuries were reported.

The crash will be investigated by the National Transportation Safety Board.

The Cessna 150 is a two-seat tricycle gear general aviation airplane that was designed for flight training, touring and personal use. The Cessna 150 is the fifth most produced civilian plane ever, with 23,839 aircraft produced. The Cessna 150 was offered for sale in the 150 basic model, Commuter, Commuter II, Patroller and the aerobatic Aerobat models.