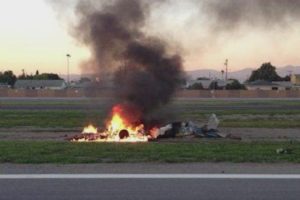 One person was killed and another one was seriously injured when two small planes collided in a fiery crash at Compton-Woodley Airport in California. The small aircraft Cessna 152 crashed and burned in a mid-air collision with a North American vintage Vietnam-era T-28. Pieces of the aircraft are littering the runway and the wing landed about 100 yards away from the main fuselage.

Downey firefighters responded to the scene shortly after the accident. The emergency teams took the injured person to a trauma center.

Witnesses say it appeared the Cessna had already landed and was taxiing when the other pilot, possibly having trouble with the setting sun, also tried landing on the same runway and crashed into it.

The FAA is investigating the circumstances of the crash.

The Cessna 152 is an American two-seat, fixed tricycle gear, general aviation airplane, used primarily for flight training and personal use. It was based on the earlier Cessna 150, including a number of minor design changes and a slightly more powerful engine running on 100LL aviation gasoline.