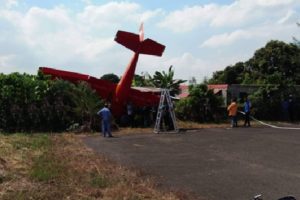 A small single-engine plane Cessna 152 failed to take off and crashed at the end of the runway at Plaridel Airport in Lumang Bayan, Philippines. The aircraft was performing training flight with instructor and trainee, both surviving after the accident without serious injuries.

The single-engine plane Cessna 152 took-off from the Runway 35 but failed to gain height and crashed at the end, hitting bushes and trees.

Eric Apolonio, the spokesman of CAAP, said that both passengers of the Cessna 152 trainer plane were safe and unhurt in the accident. The plane is owned and operated by SWAT-Strikewing Aviation Training Center, one of several training and flying schools based at the Plaridel airport.

Cessna 152 is an American two-seat, fixed tricycle gear, general aviation airplane, used primarily for flight training and personal use. It was based on the earlier Cessna 150, including a number of minor design changes and a slightly more powerful engine running on 100LL aviation gasoline.