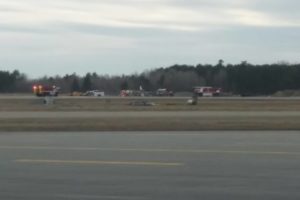 Small airplane Cessna 152 with two people on board crashed on landing at Bangor International Airport in Maine, USA. Fortunately, no one on board of the aircraft was hurt during the accident and both left the plane after the crash. The plane’s propeller was damaged, as well as the area under the nose.

“I heard what sounded like an engine cutting out when [the pilot] was coming in to land”, commented witness of the accident, Dan Warner. “That caught my attention. I happened to look over and saw him drop about 10 feet on his nose”, added he.

The FAA initiated an investigation into what caused the aircraft to crash.

The plane was a property of the University Flying Club.

The Cessna 152 is an American two-seat, fixed tricycle gear, general aviation airplane, used primarily for flight training and personal use. It was based on the earlier Cessna 150, including a number of minor design changes and a slightly more powerful engine running on 100LL aviation gasoline. The Cessna 152 has been out of production for more than thirty years, but there are still a large number of aircraft in flying condition. Due to the aircraft’s durability many examples have flown more than 15,000 hours and over 60,000 landings and are still in regular use for flight training.