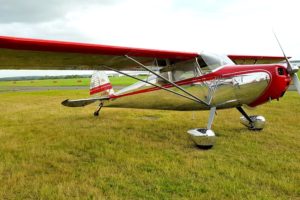 Light aircraft Cessna 170 made a hard landing at an open field terrain in Yakima County, Selah, Washington. The aircraft, which was a property of the Yakima 65 N Flying Club, suffered a loss of engine power and went down in the 9500 block of N. Wenas Road. The pilot succeeded to make the landing as safe as possible with aircraft suffering only minor damage upon impact with barbwire fencing. The pilot was not injured but was taken to hospital for medical examinations.

The pilot explained that he was flying overhead when he experienced an engine malfunction that could not be resolved before he was required to make an emergency landing.

The plane touched down in a large open field and traveled about 300 feet before coming to a stop.

The local police department initiated an investigation for the accident.

Cessna 170 is a light, single-engined, general aviation aircraft produced by the Cessna Aircraft Company between 1948 and 1956. It is the predecessor of the Cessna 172, which is the most produced aircraft in history. The four-seat aircraft has 145 hp (108 kW) Continental C145-2 engine.