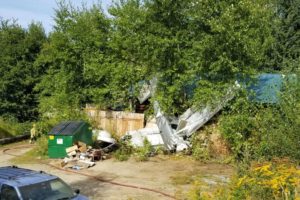 Aircraft Cessna 172 with four people on board crashed at Cavanaugh Bay Airport in Idaho, USA. The aircraft was taking off, but experienced a runway overrun and subsequent impact with fencing, crashing at the ground near the south banks of Priest Lake. The pilot and the three passengers escaped from the damaged plane without serious injuries and with minor hurts. The emergency teams arrived at the scene of the aircraft shortly after the accident and people were transported by ambulance to the local hospital.

According to preliminary information, the aircraft encountered wind shear during takeoff and failed to accelerate to enough speed. Witnesses described seeing a plane struggling to takeoff. At one point, the plane pitched 90 degrees, struck its wing on the pavement and slid across Cavanaugh Bay road on its nose.

Fortunately the accident did not cause causalties, but aircraft stopped just a few meters from a propane tank and several buildings, almost causing big disaster.

Cessna 172 Skyhawk is an American four-seat, single-engine, high wing, fixed-wing aircraft made by the Cessna Aircraft Company. First flown in 1955, more 172s have been built than any other aircraft. Measured by its longevity and popularity, the Cessna 172 is the most successful aircraft in history. Cessna delivered the first production model in 1956 and as of 2015, the company and its partners had built more than 43,000. The aircraft remains in production today.