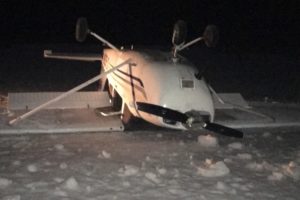 The light aircraft Cessna 172 overturned and crashed during landing at at the airport of the Canadian city of Tobermory. The Cessna 172 Seahawk was trying to land at the runway, but due to the amount of snow the gear was caught and the plane flipped. On board of the aircraft was only the pilot, who succeeded to escape from the wreck without significant injuries.

The police officers were dispatched at the scene of the accident. The investigation for the root cause is under way.

The plane, which belongs to the Waterloo Wellington Flight Centre, received significant damage and needs to be repaired before it can fly again.

The Cessna 172 Skyhawk is an American four-seat, single-engine, high wing, fixed-wing aircraft made by the Cessna Aircraft Company. Measured by its longevity and popularity, the Cessna 172 is the most successful aircraft in history. Cessna delivered the first production model in 1956 and as of 2015, the company and its partners had built more than 44,000.