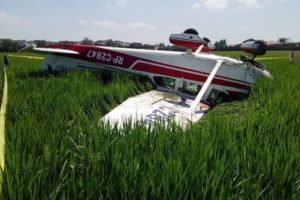 A training aircraft Cessna 172 Skyhawk crashed Monday morning on a rice field in Talavera, Nueva Ecija in the Philippines. The accident happened due to a loss of engine power after a technical problem. The aircraft came to rest inverted, sustaining substantial damage. The pilot and trainee survived the crash, but received some unspecified injuries and were brought to the local hospital for medical treatment.

The emergency teams and police officers arrived at the scene of the accident. The investigation is underway.

The aircraft received substantial damage during the crash, came to rest inverted.