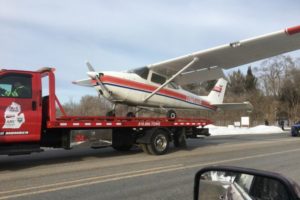 Aircraft Cessna 172F Skyhawk made forced landing on M-37 in Kent County southwest of Paul C Miller-Sparta Airport in Michigan. The aircraft with two people on board suffered engine problem and the pilot was forced to land on a major roadway terrain. Fortunately, the traffic on M-37 was not heavy and the aircraft landed without causing a more significant accident. No one was hurt and the plane was not damaged.

Steven Chanter, a flight instructor, was with a student pilot when their Cessna 172F Skyhawk began to sputter and the oil pressure cut out.

“It’s very intense and there’s very little time to do very much. We were only about 1,000 feet off the ground”, he said following the safe landing. “Fortunately the traffic was clear. We had an open lane on southbound M-37 that we could go through and there was no traffic on 10 Mile Road. Once we cleared that intersection, it was a normal landing at that point”, added the instructor.

Steven Chanter has been a pilot since 2000 and flight instructor since 2003.

The Cessna 172 Skyhawk is an American four-seat, single-engine, high wing, fixed-wing aircraft made by the Cessna Aircraft Company.

Newer PostBombardier Learjet 35A made a runway excursion at Aeroparque Jorge Newbery in Argentina
Older PostPiper PA-28-180 Cherokee B crashed near Summersville, Missouri