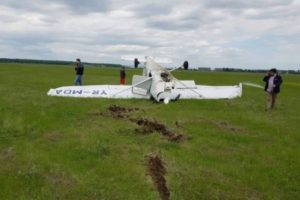 Small single-engine aircraft Cessna 172S Skyhawk SP landed upside down on the grass at Srejnicu Airfield in Ploiesti, Romania. Following the crash, the pilot was injured and taken to a hospital, but in a stable situation. The aircraft was used for training of the aviation school, but circumstances around the crash are unclear. Further details for the accident will be revealed after the investigation. Fortunately, there were no reported victims or injuries on the ground.

The local authorities suspended operations at the airfield until the investigation is complete. The accident happened in good and clean weather with moderate wind.

Further details of the accident are not revealed and it is not yet clear if the crash happened during landing on takeoff. Alongside the investigative authorities, an internal investigation commission of the Higher Civil Aviation School was set up to identify the causes of the event.

Cessna 172 Skyhawk is an American four-seat, single-engine, high wing, fixed-wing aircraft made by the Cessna Aircraft Company. The Cessna 172S was introduced in 1998 and is powered by a Lycoming IO-360-L2A producing 180 horsepower (134 kW). The maximum engine rpm was increased from 2,400 rpm to 2,700 rpm resulting in a 20 hp (15 kW) increase over the “R” model. As a result, the maximum takeoff weight was increased to 2,550 lb (1,157 kg). This model is marketed under the name Skyhawk SP, although the Type Certification datasheet specifies it is a 172S. The 172S is built primarily for the private owner-operator and is, in its later years, offered with the Garmin G1000 avionics package and leather seats as standard equipment.