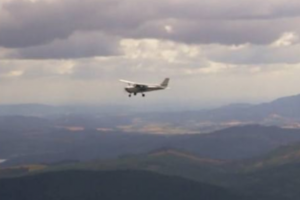 Small aircraft Cessna 182 with a pilot and two passengers on board made force landing in Nismes, Guyana. The aircraft was performing a medical evacuation mission but suffered apparent fuel starvation, close to its destination of Eugene F. Correia (Ogle) International Airport in Demerara-Mahaica. The pilot was forced to make a hard landing, crashing in the wetlands area on the West Bank of Demerara. The aircraft was carrying two passengers and a dead body on board. Following the crash, one of the passengers was seriously injured and transported to the local hospital, while the pilot and another passenger were slightly hurt.

Authorities were alerted to the crash when distress calls were made by the pilot before the aircraft went down. A rescue mission has been deployed to the area.

The Head of Guyana’s Civil Aviation Authority, Egbert Field has confirmed the crash, which might have been caused by the aircraft running out of fuel as it headed towards the Airport at Ogle.

Cessna 182 Skylane is an American four-seat, single-engined light airplane, built by Cessna of Wichita, Kansas. It has the option of adding two child seats, installed in the baggage area.