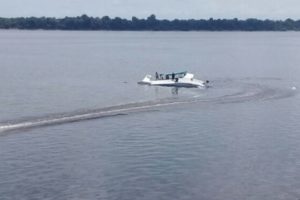 The amphibious turbo-propelled aircraft Cessna 208 Caravan I operated by Greenpeace Brazil fell and crashed at Anavilhanas National Park in Rio Negro, Brazil. During the accident on board of the aircraft were 5 people, including the pilot, but unfortunately rescuers were unable to save the life of one of the passengers. Other four were were taken out from the plane without serious injuries, but were hospitalized for medical treatment.

The aircraft crash have occurred after a problem with the landing gear, which have been opened at the time of landing. The turbo-propelled airplane Cessna 208 Caravan I fell into the water and partially submerged.

“It took us almost 30 minutes to take the plane out the water. We succeeded to rescue four survivors, but European tourist was trapped inside and died. The accident was less than a kilometer from the boat and we were scared”, said Raul de Paula, who first arrived at the scene. “She would have died drowning after the plane crashed into the water and overturned”, added he.

The investigation for the root cause is under way.

The Cessna 208 Caravan is an American single-engined turboprop, fixed-tricycle landing gear, short-haul regional airliner and utility aircraft that is built by Cessna.