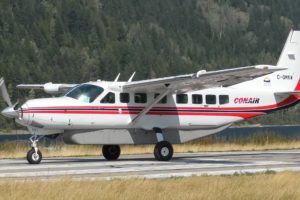 The light-engine aircraft Cessna 208 disappeared in the Japanese prefecture of Fukushima. the aircraft was making flight from island of Saipan towards Hokkaido. On board of the aircraft was only the 66-year-old Norwegian pilot. The local authorities started search and rescue operations for the missing airplane.

According to the local authorities the aircraft Cessna 208 possibly fell in the Pacific.

Currently, officers of the naval self-defense forces and local rescuers are involved in the search for the missing aircraft and its pilot. Japan’s transport ministry confirmed that plane’s door was found on 100 km off the coast.

There is a possibility that the Japan Transport Safety Board will not investigate the accident as the plane lost contact, and the parts were found, outside of Japan’s territorial waters.

The Japan Coast Guard is continuing its search for the Norwegian man.

The Cessna 208 Caravan is an American single-engined turboprop, fixed-tricycle landing gear, short-haul regional airliner and utility aircraft that is built by Cessna. The airplane typically seats nine passengers with a single pilot, although with a FAR Part 23 waiver it can seat up to fourteen passengers. The aircraft is also used for cargo operations.