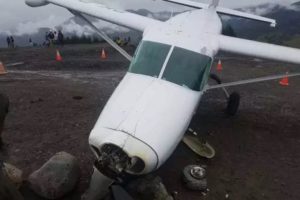 The cargo aircraft Cessna 208B Grand Caravan suffered runway excursion and nose gear collapse upon landing at Aminggaru Ilaga Airport in Omukia District, Indonesia. The aircraft was performing a cargo flight from Mozes Kilangin Timika Airport, but during landing on the wet runway at Aminggaru Ilaga Airport suffered technical malfunction of the brakes and crashed into a rock mound. Both pilots on board were not injured during the accident, but the airplane suffered significant damages.

The aircraft Cessna 208B Grand Caravan was carrying a cargo of weighing 1,270 kg, but according to officials the aircraft was not overloaded and this was not the reason for runway excursion. At the time of the incident, the runway was reported in wet and low clouded conditions with visibility between 1 and 2 kilometers.

The accident is still in the investigation of the parties concerned. According to preliminary information, the root cause was damage to the aircraft braking system in combination with the low clouds.

Cessna 208B Grand Caravan is an American single-engined turboprop, fixed-tricycle landing gear, short-haul regional airliner, and utility aircraft. It has a PT6A-114A engine.