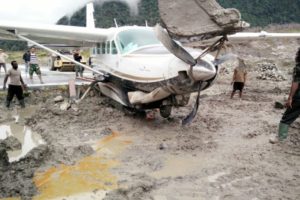 Light aircraft Cessna 208B Grand Caravan suffered runway excursion during landing at Sinak Airport in Papua, Indonesia. The airplane failed to stop on the asphalt runway and overran into a gutter. Following the accident the nose landing gear collapsed, which caused propeller blades to strike the ground. Fortunately there were no reported injuries, but during the accident there were two people on board – pilot plus passenger.

The aircraft Cessna 208B Grand Caravan was en route from Nabire Airport to Sinak Airport with cargo of about 1 ton of diesel fuel. There are no information about leaks and environmental pollution.

The investigation for the circumstances around the accident is under way. It is not yet clear what caused the runway excursion during the landing at Sinak Airport.

Cessna 208B Grand Caravan is an American single-engined turboprop, fixed-tricycle landing gear, short-haul regional airliner and utility aircraft that is built by Cessna. The airplane typically seats nine passengers with a single pilot, although with a FAR Part 23 waiver it can seat up to fourteen passengers. The aircraft is also used for cargo operations. Cessna 208 is a high-wing braced cabin monoplane powered by a single Pratt & Whitney Canada PT6A turboprop in tractor configuration. It has a fixed tricycle landing gear but can also be fitted with floats or skis.