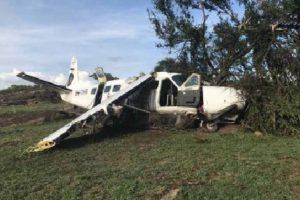 Aircraft Cessna 208B Grand Caravan was damaged after runway excursion accident during landing at the Lobo Wildlife Lodge Airstrip in the Serengeti National Park, Tanzania. The airplane with 11 passengers and 1 pilot landed at the runway, but failed to stop and crashed into a tree. Following the accident, the engine and forward fuselage suffered serious damages, while the right hand wing broke away from the fuselage. All the passengers were rescued, without reporting casualties. However, three people suffered some minor injuries and were hospitalized.

The accident was reported to local authorities and at the scene arrived rescuers to assist the troubled aircraft.

“All of the injured parties are safely in Nairobi receiving the necessary medical care. All patients are in good spirits and the indications are that they can expect to be discharged in the next day or so”, said the Coastal Aviation in a press release.

The aircraft Cessna 208B Grand Caravan was operating a flight from Lake Manyara to Kogatende airstrip, with a stop at Lobo, where the incident occurred.

The aircraft Cessna 208B Grand Caravan is single-engined turboprop, fixed-tricycle landing gear, short-haul regional airliner and utility aircraft. It has overall length of 12.60 m, wingspan of 15.88 m and wing area of 279 sq m. Cessna 208B Grand Caravan has a PT6A-114A engine and was originally certified as a two-seater cargo version and as a 11-seater passenger aircraft.