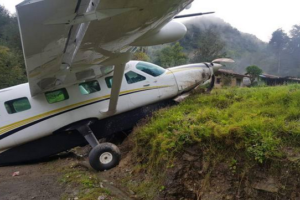 Aircraft Cessna 208EX Grand Caravan collided with an embankment during landing at Beoga Airstrip in Papua, Indonesia. The airplane was carrying product of basic needs for the region and one passenger, additionally to the pilot. Fortunately no-one was seriously injured during the accident.

The investigation for the root cause of the crash is underway, headed by the National Transportation Safety Commission (NTSC).

There were no injuries during the Cessna 208EX Grand Caravan crash. However, the fuselage of the plane was badly damaged, the propeller is bent and the tail is cracked. It is likely difficult to fly back in the near future.

The Cessna 208 Caravan is an American single-engined turboprop, fixed-tricycle landing gear, short-haul regional airliner and utility aircraft that is built by Cessna. The airplane typically seats nine passengers with a single pilot, although with a FAR Part 23 waiver it can seat up to fourteen passengers. The aircraft is also used for cargo operations.