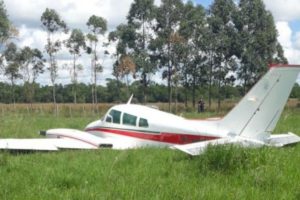 Aircraft Cessna 310H made an emergency landing on an open field in Caazapa, Paraguay. The airplane suffered technical malfunction during flight and the pilot made the forced landing in the Jasy Cany ranch, which fortunately ended successfully. The aircraft suffered serious damages in the landing gear, but the pilot survived and was transported to the local hospital for medical treatment. There were no injured people on the ground.

The workers from the ranch saw the falling aircraft and called the police while assisting the pilot. Fortunately, the man on board was without serious wounds and alive.

The accident was reported to local authorities and police. At the scene were sent officers and investigators, who will establish the root cause of the emergency landing.