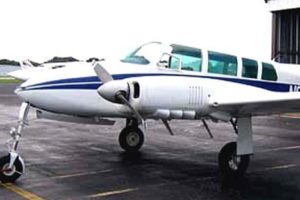 Aircraft Cessna 320 Skyknight experienced a nosegear collapse upon landing at Centennial Airport in Denver, Colorado. During the accident, there were two people on board. There was no fire or injuries reported. South Metro Fire Rescue responded to the scene and assisted the people from the aircraft, securing the zone of the crash. The runway was closed until removal of the wreckage.

The local authorities initiated an investigation for the root cause of the accident. Fortunately, there were no reported injuries during the incident.

The airplane Cessna 320 Skyknight suffered minor damages during the crash.