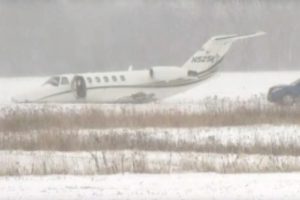 Aircraft Cessna 525A CitationJet CJ2 was damaged in runway excursion during landing at Michigan City Airport in Indiana, USA. the aircraft slid off the runway and crashed through a fence separating the airport from US Highway 20. The aircraft traveled 75 m across the grass after leaving the 1,250 m long asphalt runway and crossed a road. It went through a guardrail, ripping off the left hand wing.

The pilot and a passenger got out of the plane before police and fire crews arrived. Fortunately both were alive and without serious injuries. The paramedics treated both of them at the scene, and they did not need to go to the hospital.

Fire officials said the pilot told them they overshot the runway while trying to land. The aircraft Cessna 525A CitationJet CJ2 suffered sufficient damages during the accident.

The Cessna CitationJet/M2/CJ series (Model 525) are light business jets part of the Cessna Citation family, built by the Cessna Aircraft Company. The CitationJet is a low-wing cantilever monoplane with retractable trailing-link tricycle landing gear, a pressurized cabin, a T-tail, and is powered by two Williams FJ44 turbofan engines that are pylon mounted on the rear fuselage.