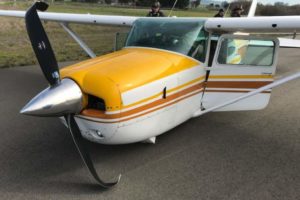 Aircraft Cessna R182 Skylane RG had a crash-land at Petaluma Municipal Airport in California, USA. the aircraft was performing a training flight with instructor and trainee, taking off from the Charles M. Schulz Sonoma County Airport and intended to end their flight class at the Petaluma airport. Unfortunately, the landing gear was never engaged and the plane slid nearly 700 feet across the runway.

The airplane sustained minor damage and the two pilots onboard were not injured during the incident.

“The plane eventually just slowed to a stop near the end of the runway and no one was injured”, said Police Officer Nick McGowan. “I have had to report on a couple of fatal crashes during the past few years, so they were extremely lucky”, added he.