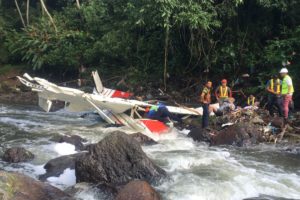 Two people died and four were injured after single-engine light aircraft Cessna U206G Stationair II crashed at Torres river in Pavas, Costa Rica. The plane crashed shortly after takeoff from Tobias Bolaños airport into a river under unknown circumstances. The accident was immediately reported to local authorities and at the scene were sent rescuers and aviation inspectors. All the people were transported to local hospital, but woman of Costa Rican nationality and American man died. Four others injured are still hospitalized, as one of them in serious condition and the rest have multiple traumas and fractures.

The accident occurred minutes after the aircraft took off from Tobias Bolaños airport in Pavas, bound for Liberia and Tamarindo in Guanacaste. The single-engine Cessna U206G Stationair II, belonging to Aerotransporte Arro SA, was in the vicinity of the Monte Galán residential, in Pavas.

“The aircraft took off Pavas and, within two minutes of making the sequence change, the contact was lost”, said the deputy director of Civil Aviation, Rolando Richmond. However, the reasons that caused the plane crash at the moment are unknown, as well as if the pilot reported any damage before the accident.

Cessna U206F Stationair is single-engined, general aviation aircraft with fixed landing gear, used in commercial air service and also for personal use. The line’s combination of a powerful engine, rugged construction and a large cabin has made these aircraft popular bush planes.