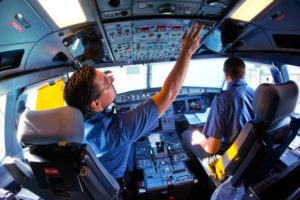 The worldwide shortage of pilots will increase in recent years, as the aviation industry continues to grow and the training centers fail to train enough pilots fast enough. We have recently witnessed a shortage of pilots at Ryanair, which led to 2% canceled flights, several hundred thousand affected passengers and confrontation with Norwegian rivals.

And these days a new turbulence is set, but on the other side of the Atlantic. The administration of the US president has published an executive order that has already been signed and provides 1000-1500 armed retired pilots to be called back because of shortage of 2,300 pilots. Most of these pilots work in civil aviation and operate commercial flights. It is still questionable what challenges the sector will have – canceled flights, nervous passengers and big fines.

Airlines such as Emirates and Australian Qantas Airways are trying to hire more pilots, but in recent months, this has been difficult because of lack of well-trained professionals. Ryanair pilots have set up trade union within the airline base in Europe, demanding better working conditions, while French Air France is striking for higher wages. In the US, the pilots, whose salaries were reduced 10 years ago after airlines collapse, now receive significant pay increases.

Insisting on better pay comes right at a time when fuel prices are rising, while ticket prices are not changing.

“Tensions from rising costs will not stop soon”, said Brian Pearce, chief economist at the International Air Transport Association (IATA). The organization has cut expectations for annual profits in the sector by 12% precisely because of rising fuel and wage costs.

It is interested what this shortage will cause – increasing pilots’ salaries (and ticket prices)? And perhaps it will lead to a change in legislation to make it easier for pilots to be hired from all over the world.

The IATA’s forecast is that 637,000 new pilots jobs will be opened over the next 20 years, as the aviation is expected to double over that period. This is why companies such as Canadian CAE Inc and L3 Technologies invest in more training simulators and technologies. And Boeing and Airbus also focus on developing training centers. Qantas announced it would invest 15 million USD in a pilot school and Emirates opened its academy in November for 600 cadets.

“We have social responsibility”, says Andrew David, who runs Qantas’ operations in Australia. “We can continue to hire pilots from smaller airlines in the country and elsewhere, but we also have to give”, added he.