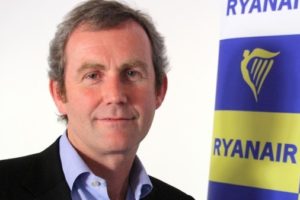 The Chief Operating Officer of Ryanair, Michael Hickey, will resign from his position, after the Irish airline had to scrap the bookings of more than 700,000 passengers last month due to an apparent shortage of pilots. Michael Hickey will withdraw from the post at the end of October and the company started searching for his heir.

Cancellation of flights affected about 700,000 passengers. This also affected Ryanair’s plans to increase its passengers to 6 million this and next year.

Chief Executive Officer Michael O’Leary took much of the responsibility for mismanagement of the pilots’ annual leave requirements – the explanation the company gave for canceling flights. Hickey, however, will continue to advise the airline, released O’Leary in a statement. The aim is to ensure a smooth transition for his successor.

Hickey will complete “a number of major projects” before leaving, such as signing a contract for engine maintenance and new hangars in Madrid and Seville, Spain.

Michael Hickey, who became Chief Operating Officer of Ryanair in 2014, has been working in the carrier since 1988. He joined as an engineer and then rises to a team leader.

This is the first resignation at the general management of Ryanair after the start of the crisis on September 15.